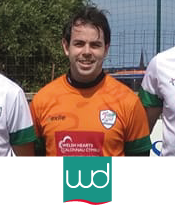 Stephen O’Neill is sponsored by Williams Denton Cyf. The original firm of Hugh E Edwards & Co was formed in 1926 and was one of the first accountancy firms in Bangor. Since then the firm has grown taking over a number of other accountancy practices and currently operates from offices in Bangor & Llandudno. In 2002 the practice incorporated and Williams Denton Cyf was established. To find out more about the company, please visit their website – www.williamsdenton.co.uk

When did you join the Dragons
About 4 years ago

Why do you play for the Dragons
It’s great fun, everyone involved is great (players, supporters, opposition) and because we raise money for loads of different charities

Favourite player
Big Gabby Agbonlahor – no one else comes close

Any pre match rituals
None, just like to get onto the pitch and get going

Making his debut as a goalkeeper for the Dragons annual Invitational in 2016 after appearing at many of our training sessions, Ste was able to make a huge difference to the squad with a solid performance that saw no goals go past him in any other matches. Well known in Saturday and Sunday leagues, Ste has a huge knowledge of some of our opponents which has proved most valuable in the use of the managers actions.

A double threat, Ste can be used in both goalkeeper and center half positions and has performed in both rolls for the Dragons, his latest roll being goalkeeper in our match versus Supporting Charities FC where the Dragons were succesful in a penalty shoot out thanks to a great save.