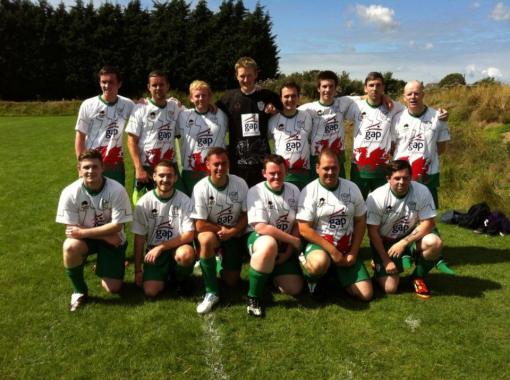 The Dragons travelled to the Wirral in what was to be the 3rd meeting between the two teams, wearing the eye catching Raging Bull provided, GAP personnel sponsored home shirts. The Dragons welcomed 2 players who were making their debuts, goal keeper Tom Thornton covering a position which has thus far proved to be difficult to fill and central midfielder Dave McGinnity.

The first 20 minutes proved to be a tight affair with possession being fought for in midfield, Dave McGinnity and Gaz Roberts proving difficult to get past for large chunks of the half. The first real chance landed to Danny Robinson who hit a shot with his weaker left foot just wide of the post. Just moments later after some good build up play, captain Mark Williams played the ball across the box which left the keeper stranded, miraculously Joe Wilkinson, making his 2nd appearance for the Dragons couldn’t manage to convert from 5 yards putting the ball over.

Total Tranmere nearly made the men from Wales pay for that miss, as their most dangerous attacking threat in the form of winger Dave Brilley beat his man on the left wing, cut inside and attempted a curling shot to the top right corner, narrowly and unluckily going over the bar.

The Dragons breakthrough came when Mark Williams latched on to a ball from the right knocked it past the keeper and just had enough of the angle to roll it toward goal, Cal White who had come on as a substitute was following up to emphatically fire the ball in. 10 minutes from the end of the half Cal White used his pace to reach a bouncing ball before his opponent and was kicked in the stomach for his efforts, resulting in a free kick 25 yards from goal. Barry Haydock renowned for his accuracy on set pieces stepped up and hit a right foot curler which smashed off the post and Tranmere cleared, leaving 1 – 0 to the Dragons at the halfway mark.

The second half started like the first had ended with the Dragons forcing the better opportunities, Jodey Brown-Williams going close with an effort from 25 yards. Steve Roberts came on with 35 minutes remaining and made an instant impact with a ball down the channel which was hit first time by Danny Robinson nestling nicely in the bottom corner.

This seemed to force the Tranmere team in to pressing further up the pitch which inevitably was leaving space at the back. Medwyn Lewis found space up the wing and beat 2 defenders before unselfishly laying the ball to Danny Robinson who had his shot saved by the keeper who could only palm it to the feet of Steve Roberts who slotted home for 0-3.

More chances came for the Dragons as the corner count mounted up, Cal White picking out Mike Goodman at the back post, who threw himself at the ball and was unlucky to see his header just fly over the bar.

Things got worse for the Wirral team when Dave Brilley came off second best in a clash with the Dragons keeper, which resulted in him not being able to take any further part in the game. In a role reversal from 2011, it was now Tranmere with just 11 players and struggling to cope with the pressure and with 5 minutes remaining the ball broke wide to Steve Roberts who was given time on the ball to pick a cross for new boy Dave McGinnity to take on the chest and unleash a volley from 15 yards which flew into the top corner.

The Dragons still had one more attack in the 90th minute which ended up with a corner from the left. Barry Haydock had come up from the back for virtually the first time in the game and was first to the ball in a busy penalty area, knocking it past the keeper for 0-5.

We would like to take this opportunity to thank Mike Jackson and the rest of the Total Tranmere team for their sportsmanship and look forward to playing them again soon.

The North Wales Dragons are this year proudly raising funds and awareness for the Make A Wish Foundation. Our next game will be against Glan Conwy Veterans at the home of Glan Conwy Utd, Cae Fwt. Sunday 25th August, Kick off 12 noon.