The Dragons in there Exile Sports made, Welsh Hearts sponsored kits were in action on the weekend with a very depleted squad. The team took ten players to Sheffield and had to borrow a player to make the squad numbers up after a couple of players pulled out over night, including the replacement keeper. This meant that the Dragons would be using a rotating keeper system, swapping shirts and gloves every 7 to 8 minutes.

Playing on a local council pitch which had seen better days, the Dragons were to play facing the wind and up hill in the first half. Safe to say, things did not start smoothly, as a melee on the right wing saw an own goal pass over our keeper as he lay stricken on the ground. The Dragons came back fighting as Martin Anderson swept forward and netted his first. The Dragons were quick to go one ahead shortly after that with a goal from Cambell Williams  A mix up with our goalkeeper came next as the ball was picked up from a pass back, resulting in an indirect free kick just a couple of yards away from the goal line. The free kick was scored when the ball somehow found a gap in a seven man wall. Shortly afterwards they were to score another making 3-2 at the break. 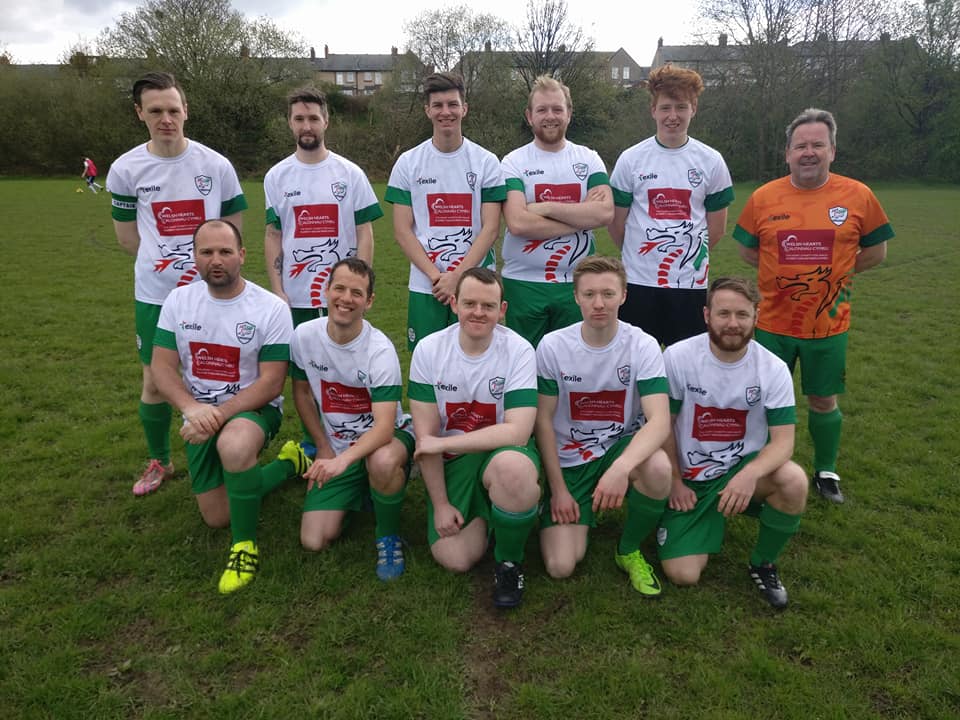 The Dragons were now playing Downhill and trying to make use of the wings as everything was going too central in the first half. The attacking nature of our play would be our downfall as Village Aid made use of their team of substitutes and made two great looping efforts which were awarded with goals. The Dragons were now trying everything, and were braking down the students of Sheffield. Josh Turner had a shot low and hard saved by the keeper, Cambell Williams was unlucky not to net his second of the match and Dragons co founder Gareth Roberts was close from a crossing ball by Phill Jackson but the keeper managed to rush out and get a finger tip save. From the attacks a long throw in was made and the referee spotted a push on the Co Founder and gave a penalty which Martin Anderson calmly took choosing the option of going straight down the center over the keepers out stretched arm, bringing the final score to Village Aid 5 – North Wales Dragons 3

We would like to thanks Amy Paterson who organised the event and to all of the students who took part. Good luck to you all in your studies this year and if you are ever in North Wales, the Dragons will be waiting for a rematch