Trescal invited the North Wales Dragons for a game of football on Sunday 10th November to raise funds and awareness for the Martin Gallier Project. The team made up of employee’s of the international calibration specialists is a great throwback to what community football was about and now with the added extra bonus of doing something for charity thrown in.

The match was played at the Hollingsworth Group Stadium, home of the Welsh Premier side, Airbus FC. A very unique ground to say the least, not many football pitches could you be fighting to be heard over the jet engines of the giant of the sky Beluga planes as they land and take off with wings for the Airbus factory in France.

The Dragons were dealt a few blows with in the week leading up to the game, we lost a defender to work commitments and then lost two midfielders and two goalkeepers to injuries. Luckily we are always adding to our squad and we were able to add in a new face and also able to add from our pool of players who battled through injuries to play on the day. 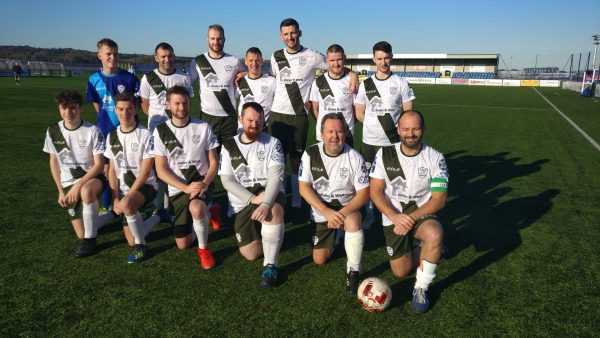 Playing in our Wales and West Housing sponsored kits the Dragons kicked of the half playing away from a blinding sun, Trescal in their blue shirts and grey shorts were quick to press and attempt a couple of shots at goal. Regular striker for the Dragons, Tom King found a new calling in team when he was switched to play centre back, along with fellow team mates Luke Hughes, Phil Jackson and Mat Gregory in defence for the first half, all four making critical challenges to stop Trescal gaining the early momentum. The first goal however came from a goal mouth scramble, as goal keeper Josh Brizell punched the ball out of the area only to find the waiting feet of a Trescal player. Our midfield tried to push up higher after this and saw some slight tweaks in positioning, Mark Watson in his second appearance for the Dragons was setting up a few chances for Ash Seddon and Josh Daniels while Martin Anderson was helping out the defence when Trescal attacked. In a scene that was near identical to the first the Dragons went two down before a stoppage in play was made as both teams came together to observe a two minute silence at the 11th hour to remember the fallen on Remembrance Sunday. Kicking off again the Dragons were pushing harder, making his third appearance Harri Jackson took a hit on the wing with a strong challenge which was not given by the referee, this however lit a fire in the sixteen year old and he flew down and found himself challenging the keeper, a mix up between Trescals defence saw Harri Jackson net his first goal for the Dragons and also becoming the youngest player to do so for us. The men in blue pushed up higher after this and were soon awarded for their pressure as a penalty was awarded and scored past the keepers right in to the bottom corner who was unlucky to get a hand to it. Now feeling on a roll the Trescal 11 were taking shots as and when they could and found the net one more occasion in the first half. The Dragons were fighting back though, Luke Hughes was making a nuisance when he could by darting forward and spreading the ball to the forwards, Josh Daniels and Martin Anderson were close with a couple more efforts. The newest member of the team was in the shape of Jonah Jackson, cousin of Harri and also 16 who found himself on the right handside of the pitch switching a cross out to the wide left into the waiting feet of Ash Seddon who does what he does best and switched inside to cross the ball into the net past the keepers left hand-side making it 4-2 at half time.

At half time the mood was good, everyone was putting in 100% and not one player could find a fault. A slight change was made to the players positions to allow the more attacking Luke Hughes to move forward while Mark Watson took up position as a central defender. The Trescal team set up for the second half quite defensive and were proving a tough wall to break down in the second half. The cracks were starting to show when they moved to what looked like a back three and were beginning to miss challenges on the fast paced Ash Seddon. Ash showed this when he was in one v three showdown and managed to find his way one on one with the keeper and slotted it home for his second of the game. A wake up call for Trescal as they took opportunities to strike when they could and found the net one more time. Goalkeeper Josh Brizell was pulling off some great stops in goal, tipping a couple over the bar. Paul Cornwall, currently on the injured list had a great showing by spreading passes across the field before Josh Daniels time to shine happened next when from near the halfway line he saw the keeper peddaling backwards as if he knew what was about to happen and chipped him to the groan of the team in blue. With only a few more minutes to play the Dragons pushed higher and higher trying to net that goal that would see the teams at least draw at the 90th minute mark but alas it was not to be as Trescal were to find the net one more time making the final score, Trescal FC 6 – North Wales Dragons 4.

We would like to thank Jon Lear and the rest of Trescal team for organising the event which helped raise over £150.00 for the Martin Gallier Project. Also huge thanks to Steve Benyon and staff at Airbus for allowing us the use of the wonderful pitch and look forward to playing a few more games there in the future.

This brings and end to our 10th year anniversary season as this is our last scheduled match of the year. It will be back to training for the team this coming Friday as we now set our sites on next year as we head towards the Christmas break with a few matches and tournaments announced already for 2020. It goes with out saying that we owe a huge thanks to all of our players who have put on our kit this year and the years before that, with out them we could not do what we do. Also thanks to you, our followers who keep up to date with what we do on and off the field and support us with what we do.