North Wales Dragons took on Rydal Penrhos School parents and staff on the 21st January with all proceeds going towards The Offside Trust.

It’s hard to remember the last time the Dragons took to the field of Llandudno FC with out the sounds of the flag ropes banging against the poles or for that matter a game when we were not greeted with a downpour or two. The weather didn’t matter to the Dragons who after a disappointing loss to Merseyside Thunder in our last match were raring to go and wanted to get 2018 of to a winning start. 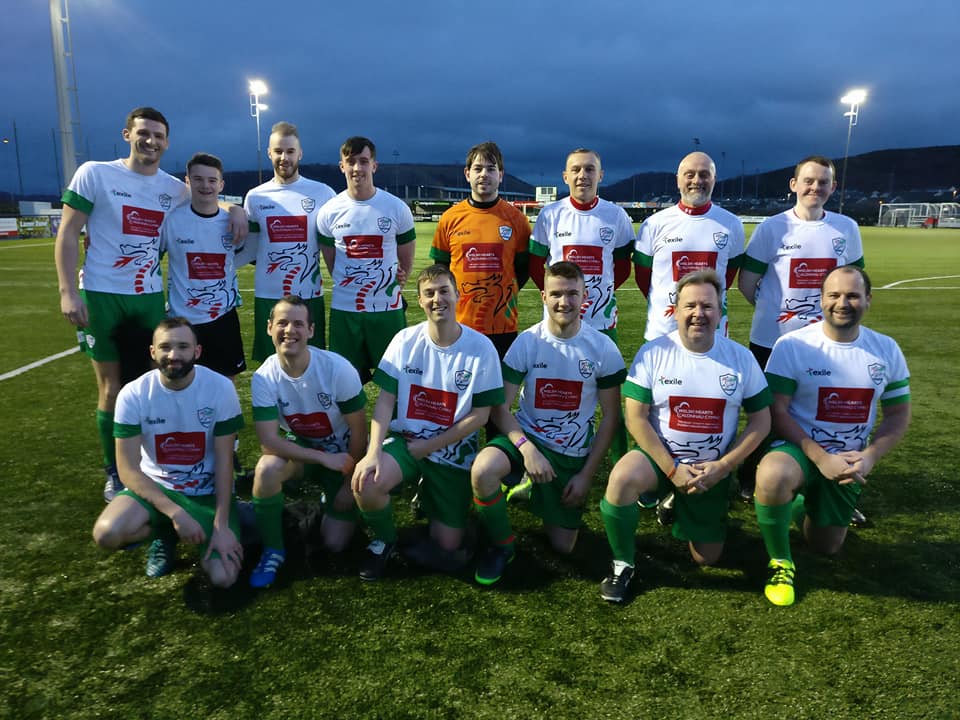 The Dragons in there Exile Sports made, Welsh Hearts sponsored kits were facing some familiar competition in the form of Rydal, having faced them in annual tournament in 2017 which was a goalless draw. This was not the case this time however as it was soon apparent that the charity football side meant business. Breaking through Rydals midfield along the wings a flurry of shots were aimed at the keeper but a series of blocks by the defence and a couple of saves from Rydals keeper had them settle down and try and play into the wind which had picked up behind the Dragons backs. Captain Martin Anderson in a star performance was keeping the midfield quiet as Rydal continuously tried the route 1 approach, this in turn allowed for both left and right backs to venture forward, a move which nearly paid off when a well time shot by right back Mat Gregory saw the corner of the post and cross bar rattle. The striking partnership of Tom King and Josh Daniels seemed to be working very well and a through pass to Josh saw him take a shot but outcoming defender and Welsh Premier referee Mark Petch took the brunt of the shot which then rolled into the back of the net making it 1-0 to the Dragons at halftime.

The second half brought a more focused Rydal who were intent on making the wind play into their hands with looping balls forward only to be stopped by an impressive back four of Luke Hughes, Cal White, Craig Berry and Mat Gregory. Seeing the effects Rydals performance was having a change was made as Daymo Barr was substituted for left back Phil Jackson which allowed for Luke Hughes to push further forward. This soon had the desired affect as the ball found it’s way to the feet of the fast paced Ben Hingley who took aim and his shot sailed past a stranded keeper. Rydal were not happy with this and pushed up higher making for a crowded box, with the Dragons unable to clear the box, Harvey Holmes of Rydal took a shot which looped over keeper Stephen O’Neill. A response was met almost immediately as Tom King sealed the Dragons victory with a powerful strike making the final score, North Wales Dragons 3, Rydal Schools Penrhos parents and staff 1

We would like to thank Rydal for a great game and hope to play them again in the near future.