Your North Wales Dragons were in action again this weekend as we took on Supporting Charities FC in a very open and entertaining match. The Dragons in our Exile Sports made, Welsh Hearts sponsored kits were up against unknown opposistion who had travelled from Bradford the day before and spent the night in Llandudno.

The game took place at the wonderful ground of Llandudno FC, and once again the sunshine had come back to make playing conditions perfect. The Dragons were quick on the breaks but were met by a good defence, not allowing our players to shoot and resorting to inside the box attempts which were quickly snatched up by Supporting Charities FC keeper. An early chance for the visiting team saw the first of their goals but it was disallowed due to a head injury to first team debuant Ethan Jones. This clash of players also meant the Dragons would be missing a player for the rest of the match due to a cut needing a hospital visit. A quick reshuffle of the pack of the players and we were on our way again, this time with supporting charities pressing further up the pitch but they could not make their chances count against a great defensive display by Martin Anderson, Cal White, Stuart Howles and Mat Gregory. The teams went in level at half time, 0 – 0 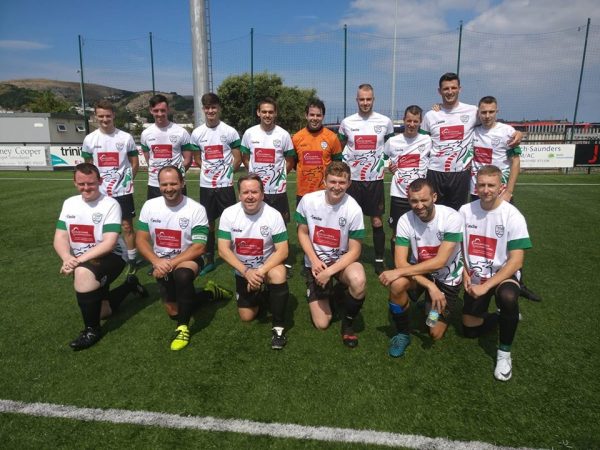 The Dragons refreshed from the halftime break were back on the front foot when the whistle blew for the second half but a quick counter attack saw Supporting Charities net their first goal. The Dragons were very quick to reply with Mat Gregory netting his first goal in to the keepers right. The visiting team would have a little help from a Dragon next as an own goal was conceeded with a lovely chip back to the keeper. The Dragons don’t take to well to going a goal down and were soon battling their way up the field allowing the Dragons top goal scorer Josh Daniels to net his goal for the match. The Dragons were looking ever more dangerous on the attacks with more quick passing from left back Phil Jackson to a changing midfield of Josh Connoly, Paul Cornwall, Ben Hingeley, Cambell Williams and Tom King. The visitors in their native Bradford FC colours of maroon and orange were fast to act on this and netted their third and final goal. Josh Dale would net the final goal of the match with a scorcher of a shot sailing past the keeper making in 3 – 3 at the final whistle.

Supporting Charities FC suggested a penalty shoot out to declare an overall winner, our players were only to happy to say yes to this. Goalkeeper Ste O’Neill making a brilliant save and it would be Stuart Howles who would net the final goal with the Dragons winning 3 – 2