The North Wales Dragons took to the ground of Llandudno FC for the first time this year when they took on Team Footprints in a friendly match raising funds and awareness for Footprints CEC. Team Footprints playing in Nottingham Forests away strip of blue and black stripes were looking for retribution from the recent tournament the two teams played in, the Dragons coming out 2-0 victors in that match up.

It would not be Llandudno with out the sound of the flag poles rattling in the wind, this very much being the case as the wind was growing strong by the minute on the coast, meaning long balls needed to be timed perfectly. The Dragons playing in their Exile sports made Welsh Hearts sponsored shirts were on the back foot quite quickly, a goal down around the 14 minute mark had the team shaken a bit. Team Footprints were pressing with every chance they had and were using the wings superbly but just missed out on the final ball on several occasions. The Dragons were staying organised at the back with Craig Berry, Ste O’Neill (Sponsored by Williams Denton), Cal White and Luke Hughes picking off any balls that somehow managed to get past a very defensive midfield of Martin Anderson and Stuart Howles. After the early set back we were soon finding ways forward, sometimes along the floor passing quickly and moving the opposition out of their spaces and sometimes just going straight from defence to striker with the long ball. It was through the route one technique of a long ball that found it’s way to the feet of Paul Cornwall who netted the ball over the out rushing keeper. Paul along with Joseph Pitts and Ben Hingeley were now making the most of their chances, having the keeper rush out of his box into no man’s land on several occasions at the team in black and blue struggled to make it back from attacks. The counter attack style soon got the best of Team Footprints as Ben Hingeley was fouled in the box and a penalty was awarded which Paul Cornwall put away. Team footprints were soon back in it however as they netted their second but the Dragons not phased by this were now running on top form with passes aplenty that lead to a wonder strike by Martin Anderson from outside of the box that sailed past the keeper making it 3-2 as the half time whistle went.

A slight formation change to make us a bit more attacking in the second half saw us move into a back three, this did have the opposite effect on our defence though as the team from Nottingham were pressing heavy again. However the ball soon found its way to Ben Hingeley who netted his first. The Dragons were battling hard in the second with not only Team Footprints but also with the wind which had now grown quite fierce. Ash Seddon and Luke Hughes were pulling double duty on the left swapping every now and then and it would be a pass from Luke that set up Paul Cornwall to net his third goal of the match but was ruled offside. A flashback to Craig Berry’s goal scored in the previous tournament happened next when David Ashbrooke was unlucky with a long punt from the halfway line which had the keeper rushing back just to see it shave the bar. Ben Hingeley was soon making a run again this time assisted by Josh O’Connolly he rounded the keeper to make it 5-2. The Dragons were now ready to see out the rest of the match and were getting closed down quickly, a wonderful block by Cal White certainly left a mark on the players leg as he stopped a great powerful shot at goal. Team Footprints looked to see anyway back into the match with shots constantly being stopped by goalkeeper James French until the final whistle blew. 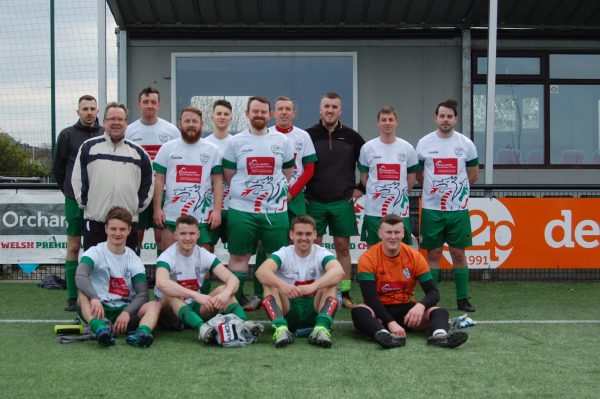 Also a huge thanks to Josh Turner who is currently on the injured list but came down and took up media duties for the day. You can now see photos from the game on our facebook page