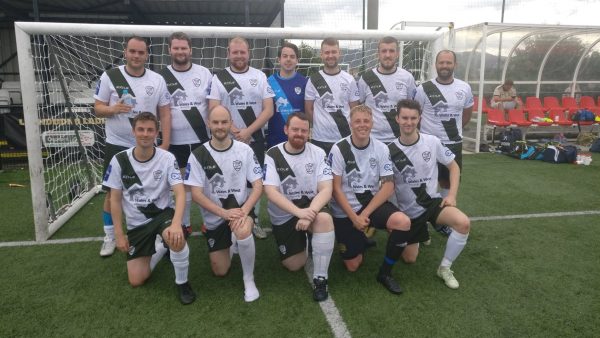 The Dragons annual invitational was held a little bit later than usual this year with the 10 year anniversary celebrations taking centre stage. Taking place at the ground of Llandudno FC, the tournament now in it’s seventh year, brings teams together to raise funds and awareness for various charities. The Dragons were fielding quite a strong side, bringing Brad Tooth back in from his recent matches with us against Chester and the recent trip to Cardiff. Jason Owen joined us for the first time while the rest of the squad was filled with our regular players from our past matches and training sessions

v Boots – Action On Hearing Loss
Starting off the day was familiar opposition having played in the tournament for the last couple of years. The Dragons in their brand new kits of green and white, sponsored by Wales and West Housing were looking forward to getting started. Quick on the attack and solid at the back it was not long before your community football team were netting their first goal of the tournament with Ash Seddon taking aim with a lovely slotted goal nestling past the left side of the keeper. Boots pushed on but were continuously stopped by the defensive back three of Jason Owen, Craig Berry and Dave Algieri. Brad Tooth made his presence known next with a strike that sailed past the keeper. Boots by this time had had enough and were pushing forward with everything they had and quickly paid for it with Craig Berry able to go on a run and sent the goal keeper the wrong way. Final score, 3 – 0 to the Dragons.

v CPD Tal-Y-Bont
North Wales Dragons own Rich Parry entered his own team for the third year running. The defender was with us on our recent trip to Cardiff and seemed to have our team scouted out very well. A game of defence v defence with shots for both sides to only be stopped by some wonderful saves by the Tal-Y-Bont keeper and our very own Ste O’Neill (Sponsored by Williams Denton) The Dragons courtesy of Ash Seddon were to hit the bar twice in this match. Final Score, 0 – 0

v Wirral Vikings
New to the tournament this year, the Vikings were a great team to play against, a friendly bunch who had the spirit of the day nailed down. Playing in dark blue the Wirral based side were strong on attack but Kieran Williams and Martin Anderson were keeping the midfield locked down. Playing off the Midfield two was Joseph Pitts who was finding himself a targeted man in this game but was quick on the turn and shrugging off the challenges to find himself one on one with the keeper which he slotted the ball home past. Supporting Joe upfront was Ash Seddon again who was fed the ball by Martin Anderson and calmly sent the keeper the wrong way. Joe still with the target on him managed to turn his man for his second of the game with a driving shot that left the keeper standing. Settled down into the match, Josh Turner, Rob O’Leary and Gareth Roberts were brought on to try their luck with Josh coming close with a powerful strike and Rob showing his class by leaving players standing on the spot with his silky skills. Final Score, 3-0

v Merseyside Thunder
Now the big one, the Mersey rivalry. Formed by Dragons Co Founder Ste Roberts when moving to the Wirral, the team not only features himself but also three Dragons players from the past in the shape of Thomas Thornton, Barry Haydock and unfortunately missing the tournament, Joe Wilkinson. The last time the Dragons played thunder, it was an absolutely devastating 9-1 loss for the North Wales based team. The memories of that game was still taking it’s toll in the minds of some of today’s players and all of them went out with that little extra something. Fast paced, some times hard hitting and with the odd laugh thrown in, this was a game that anyone could have won. Merseyside Thunder talisman Ben Dunne looking to up his tally of 5 goals in the tournament already was close to taking aim a few times but found his shots being blocked by the defensive two of Dave Algieri and Jason Owen. A shot was driven hard and fast towards Ste O’Neill who managed to toe poke it up towards the post and cannon back into play. Kieran Williams came on which allowed Ash Seddon to push higher up and with that he soon found himself one on one with the keeper who spread himself wide just for Ash to find the smallest of gaps to the goal. Final Score, 1-0

v Gobaith Cymru
Our friends from South Wales had made the 4 and half hour journey from the Cardiff area on Sunday morning. Now in our third meeting between the two clubs, the Dragons knew what to expect from the team in yellow. This fast, tactical and football loving team are a superb bunch of lads to know. The Dragons would need to win this and then rely on a result going our way in the final match of the day between CPD Tal-Y-Bont and Merseyside Thunder. Ash Seddon was back on the pitch and making a name for himself in Dragons history with a wonder hit of a goal when the chance came for a one time shot volley which flew past the Gobaith keeper. The team in yellow were quick to push on, testing the defensive nerve of the Dragons. Joseph Pitts soon found himself with room to shoot which smashed the underside of the bar and was deemed to have gone in by the referee. Making changes, Josh Turner was brought on for another attempt to worry the Gobaith keeper. Rob O’leary was then brought on to try his luck upfront and Gareth Roberts was then brought on to sure up the midfield. The Dragons had settled into the rhythm of the game now and were testing the defence of Gobaith. Rob O’Leary had found himself trapped near the sideline, but with a sweet twist the striker broke free from his defender and slotted a perfectly weighted ball to the feet of Martin Anderson who continued his 2019 run of scoring in every Dragons event as he scored pass the left side of the keeper. Final Score, 3-0

The Dragons players now all waited on the sidelines as CPD Tal-Y-Bont took on Merseyside Thunder in a great match that even saw a disallowed goal for Tal-Y-Bont. The final score though would remain 0-0 which meant we are this years Dragons Invitational tournament winners. 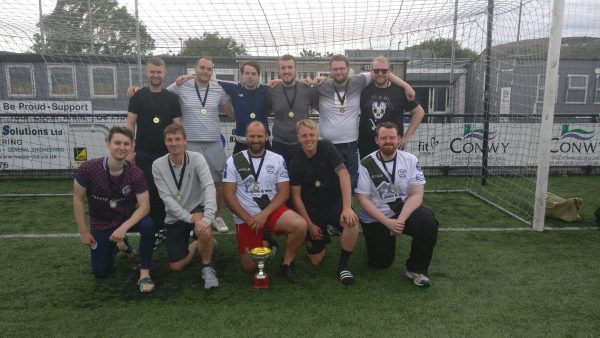 A huge thanks to all of the teams that took part in the tournament, to Llandudno FC and to the referees.

Also a huge thanks to Ghazala Jabeen who handed over the Martin Swindells trophy to our captain Martin Anderson. The trophy is named so after her late husband who passed away from pancreatic cancer.

A huge thanks also must go to Phil Jackson. One of the original Dragons, currently sidelined was in charge of making sure everything ran to schedule and was in charge of getting the results and scorers in for the day.