The North Wales Dragons were invited to a football tournament last weekend by the wonderful Supporting Charities FC who we had faced in 2018. The matches were to be played for the Stephen Derby Cup while all teams involved raised funds and awareness for the MND Association. 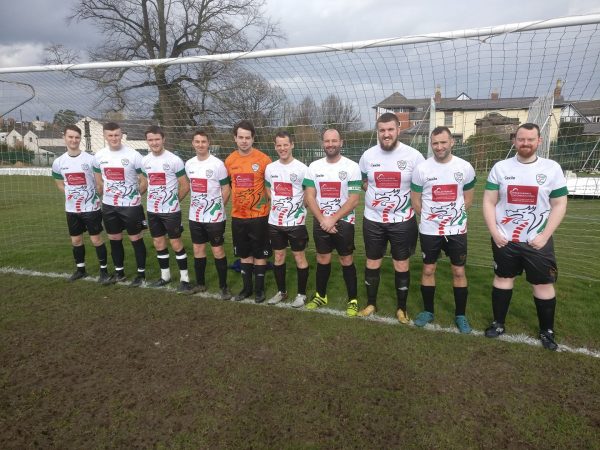 The 20 minute, seven a side matches took place on the mixed sport fields of Chester Broughton Hall. The Dragons sat out the first round of matches, taking the opportunity to scout a couple of our opponents. First up for us would be Hollyoaks, a team put together from the popular TV soap opera. A warmed up Hollyoaks were proving a great opening match for the Dragons, a side who were quick on the ball and knew how to attack but found themselves shut out by the solid back three of Mathew Gregory, James French and Craig Berry. A few chances for both sides but ultimately it would end 0-0, a great see saw of a match that could have gone either way, it would be very interesting to see what would happen if the two teams met again.

Next up for the team was Battling Fat Lads in one of the brightest kits this player has ever seen. The team playing in a mix of blues, reds, yellows, greens and more were a great bunch to play. The mission of the Battling Fat Lads is to raise the profile and increase understanding of various men’s health issues through The Game of Football. Our Dragons, now warmed up were ready for the battle ahead and we were soon pressing with Martin Anderson laying off a great pass to Paul Cornwall who netted the only goal of the game. Joseph Pitts and Dragons new boy Ashley Seddon were unlucky not to put the Dragons further ahead on a couple of occasions.

A quick turn around and the Dragons as we set up against Team Foot Prints a Nottingham football team supporting charity FootprintsCEC This team had a few aces up their sleeves, boasting former Plymouth Argyle player David Norris, current QPR Womens player Samantha Miller and Sky Sports news presenter Tom White. Unfazed by what could lay ahead the Dragons were now showing their class. Luke Hughes in a star performance in the midfield was quick to stop breaks while Ste O’Neill was showing off in goal with great saves. Joseph Pitts would net a scrappy goal while being pulled down to the ground. Craig Berry would net the Dragons second with a halfway punt as the keeper had pushed up for a last minute corner making the final score 2 – 0 to the Dragons. We are looking forward to playing Team Foot Prints again very soon.

Up next it was Supporting Charities A and a change of field. The match took place on a hill bringing memories of Tranmere Rovers Shafts field matches and last years Betws Y Coed game. Starting uphill the Dragons were feeling the press with top goal scorer of the tournament breaking down the wings. Playing in a now wider 11 a side pitch with the goal lines being that of a normal 11 a side took a little bit of getting used to. This showed when Luke Hughes gave a penalty away, the original penalty was saved of the bar but was put into the net, this was ruled out as the ball had to be touched by another player, not by the penalty taker. The teams swapped sides at the ten minute mark and we were unlucky not to go ahead with a few close efforts. The Dragons failed to clear a chance in the end of the top scorer of the tournament and only a couple of minutes later the referee was blowing his final whistle on a whirlwind of a match.

To go out of the tournament with only 1 goal conceded was a huge blow for us, but our Dragons can hold their heads high with such great performances. At the end of the day, charity is what we are here for and it was great to see everyone in the club house after the tournament enjoying themselves while an auction and raffle was hosted by Charlotte Thomas. At the end of the day, all of the teams and local people had raised over £1130 for MND Association