Your North Wales Dragons were in action again this weekend, with the boys in their Exile Sports made Welsh Hearts sponsored kits were taking on new comers to the football scene, Peugeot and Citroen Parts North West Manchester also known as team #BreatheForBob. The match was played for the Fat Friday Cup which was named in memory of Bob Reece who passed away in March 2018 of pulmonary fibrosis whilst waiting for a lung transplant. It was for this reason that the game was played to raise funds and awareness for the British Lung Foundation. 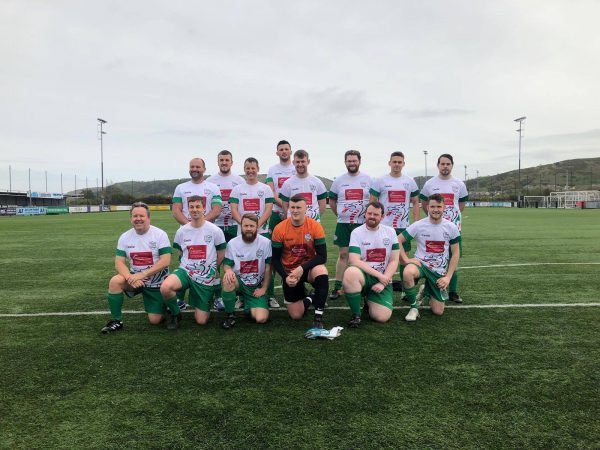 The Dragons were feeling confident after a good run of games, beating Team Footprints 5 – 2 a couple of weeks before helped to get the team back in to form. The Peugeot and Citroen Parts team were mostly unknown to the Dragons apart from one man, Joel Davis who played with us in our very first match 10 years ago. Kicking off facing the last few blows of wind from Storm Hannah we set off into attacking mode straight away. Luke Hughes took several challenges from the opposition playing in blue and was taken down in the box to be awarded a penalty by referee Tony Howard. A superbly executed thunderous strike from Martin Anderson from the spot and the Dragons were 1-0 up with 5 minutes on the clock. Team #BreathForBob were looking to fight back with a few efforts saved by goalkeeper James French. Trying out a new formation the men in blue were struggling to get past an impressive wall of defence in the shape of Mat Gregory, Ste O’Neill (Sponsored by Williams Denton) David Ashbrooke and Phil Jackson. Craig Berry was shouting the team in to shape from the midfield letting the attacking rights and lefts of Luke Hughes and Stuart Howles to drive forward creating chance for the strikers. Martin Anderson with a goal to his name already was looking to shoot at every chance he got. Joseph Pitts was unlucky not to connect with a twisting volley from one of the many crosses put into the box. It would be the return of Tom King that would settle the score for the first half with a powerful half volley that screamed past the keeper.

The second half saw a couple of changes to the squad, with Joe, Tom and Luke given a rest and Rob O’Leary trying out a new striker role along side Ash Seddon. Also we welcomed new blood to our team in the shape of Kieran Williams who has been training with the Dragons for a few months now. Ash was soon tearing into the squad and managed to net his first goal, taking a shot from outside of the box on the left almost on the white lines of the goal post side. The Dragons were now settled but this drew our one and only mistake of the match for we did not see a super sub being made, 12 year old Aiden Browne came on and broke apart our midfield and defence like no other, eventually finding himself one on one with the keeper, Aiden feinted to right and slotted the ball to the left sending our keeper diving the wrong way. There was some truly great saves from the #BreathForBob keeper saving shots from Tom King, Stuart Howles and Mat Gregory but he could not stop a bullet header by David Ashbrooke. Ash Seddon was not done either, a near identical goal to his first but this time from the right hand side of the goal. Ste O’Neill wanted to get in on the goal scoring action and drove forward taking a shot that sailed past the keeper just as the final whistle blew so unfortunately did not count making the final score North Wales Dragons 5 Peugeot and Citroen Car Parts North West Manchester – 1 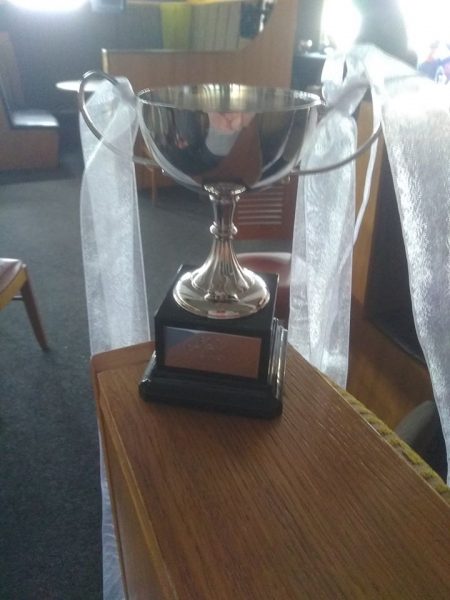 A huge thanks to Joel and the team coming to play against us in what we hope was an enjoyable day for you all. Thankyou to Curtis Murray from Sports Direct Llandudno who kindly donated a match ball for the game today. Also thank you to Hazel Reece who organised the match and after game raffle in memory of her husband Bob, raising over £300 in the process for the British Lung Foundation