Underneath a darkening sky at the home of MBI Llandudno the North Wales Dragons were facing a tough opposition in the form of CAIS Jigsaw Lions. A meeting had taken place before between the two teams with the Dragons edging out a 13-0 win over a team of employees, customers and contributors. Since then CAIS have gone on to improve greatly, becoming a feared team of the local Sunday Leagues with a reputation of being winners. 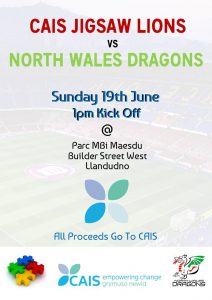 Playing for the first time for the CAIS Charity Cup the Dragons playing in their GAP Personnel sponsored Raging Bull made kit were looking a very strong side. Fresh into the squad was Bobby Gaze who was brought in by manager Mark “Berger” Williams. Also new into the squad through our Friday night training sessions were midfielder Greg Hardwick and defender Craig Berry, the rest of the squad being filled out by returning players. 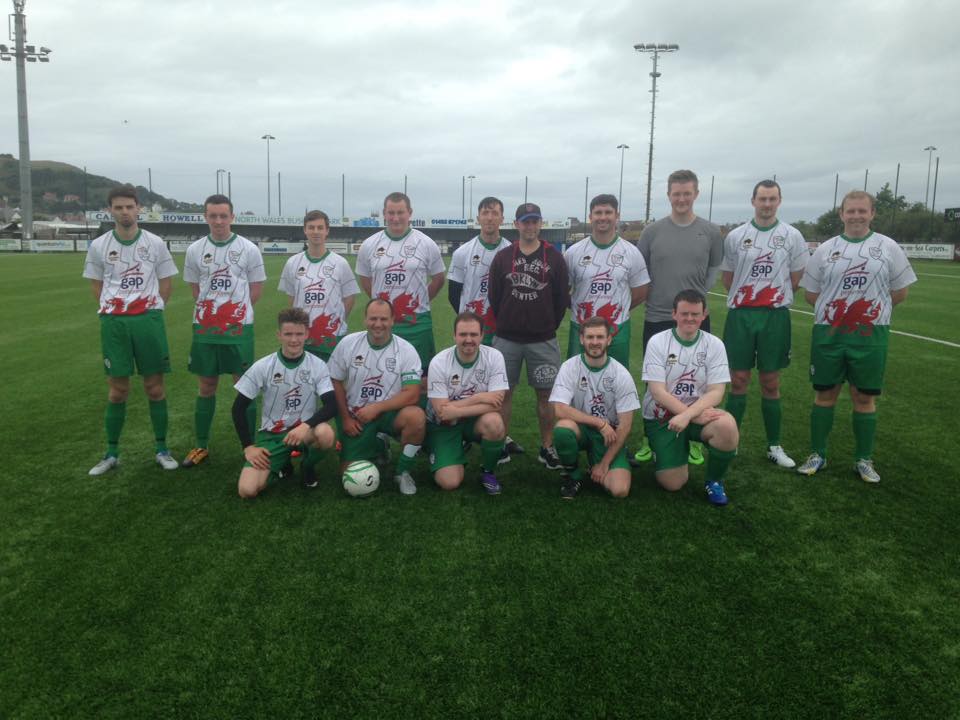 While new to the first team, the players settled in to rhythm fast with Craig Berry letting everyone know there positions. Both teams were unlucky not to score in the first half with a few corners being cleared by the Dragons and great saves being made by both keepers making it 0-0 at half time.

With the rain now settling in for the second half the ball was rolling quicker along the artificial surface allowing the Dragons to get the ball into the strikers. Soon afterwards the Green and white men were a goal ahead as Bobby Gaze took a shot that deflected and sent the keeper the wrong way. As the Dragons were settling in for the remainder of the match, CAIS made their chances count and after a melee of attacks they found their way to goal as the Dragons were unable to clear their lines.

The Dragons had had their wake up call. Now pressing higher, Captain Martin Anderson was slotting the football into the feet of striker Ciaran Jones who soon made it 2-1 and was unfortunate to not get his second of the match. Now in full attack mode the Dragons were countering each CAIS break which was being controlled by Dragons man of the match Luke Hughes. The final whistle blew with the Dragons being crowned the first ever CAIS Charity Cup winners.

Huge thanks to CAIS for inviting us to have a match which will now be an yearly event after raising over £500 for the CAIS Charity. Thanks to MBI Llandudno for the use of their terrific facilities and to everyone who turned up to watch and to play.

Until the next match