Your community football team the North Wales Dragons were in action again this weekend. The usual sites of Llandudno were replaced by the sounds and sights of the capital city as we travelled to Cardiff. Playing in the House of Sport the training facility of the Championship team. The day was being hosted by our friends from the South, Gobaith Cymru FC as all teams showed up to raise funds and awareness for the British Liver Trust as they played in the inaugural 7 a side, Charity Champions League Tournament. 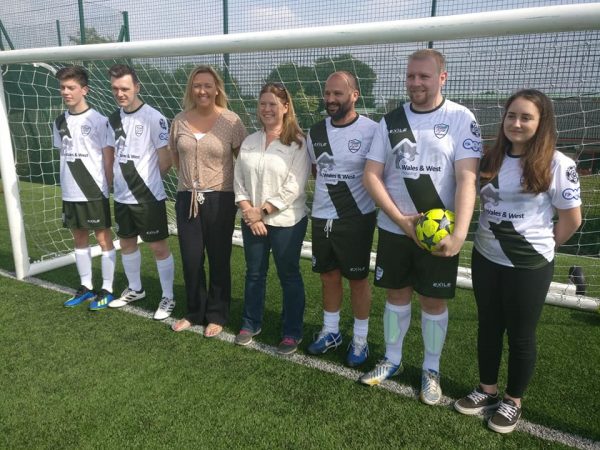 The day started off with a meeting with our new kit sponsors Wales and West Housing and the big reveal of the shirts designed by Pen and Ink Studios. The all new kit of white with a darker green stripe has stats, awards and comments from the players of the Dragons to celebrate the ten years we have been playing the beautiful game. The Secret Society of Super Villan Artists, M&S Water services and the Resuscitation Council complete our sleeve sponsors while the Pen and Ink Studios logo is teamed with our back of shirt sponsors Independent Solutions.

The Dragons were fielding a strong side for this event, the seasoned Dragons players of Ste O’Neill, Craig Berry, Rich Parry, Martin Anderson, Stuart Howles, Josh Turner and Gareth Roberts were joined by Brad Tooth making his second appearance in goal for the Dragons. They were joined by Adam Dexter who was making his debut for the team and Harri Jackson, who has been training with us since he was 13 was now making his first appearance for the team in white at the age of 16, becoming the youngest player we have ever fielded. Phil Jackson who was unfortunately sidelined after a great showing in his testimonial match a couple of weeks before, was in charge of the team with Gareth Roberts and Martin Anderson helping out when they could.

The Christian football team based in Bridgend playing in the united Christian church league were up first for the Dragons. With an attacking formation set by the management the team were full of confidence heading into the match with the unknown opposition. This confidence was soon rewarded when a mix up between the defence and keeper saw Craig Berry take aim and net his first of the day. A long ball from Rich Parry was next on the agenda as it found the feet of new boy Adam Dexter who left the keeper standing with a powerful drive into the top right corner. Adam was not done showing his skill in this match, escaping challenges from the Coity defence, Adam slotted the ball to the left side of the keeper.

The hosts for the day were up next, and a rematch of last years hard fought victory was very much expected. The Dragons had set up like their last match and hoped to find a not to defensive Gobaith. The team in yellow were quick to begin challenging but found themselves in a bit of a jam when Craig Berry broke free from the defence to curl a shot into the top corner. Brad Tooth was on form in this match, picking out players in space, a quick ball to Martin Anderson saw strike a lovely shot that the keeper was unlucky to get a full hand behind. Gobaith had a break next as a constant drive by the team saw a cross canon off one of our own and into the net. The Dragons thinking this was just a blip carried on with game plan. Straight from Kick off Martin Anderson laid off a pass to a waiting Josh Turner who took a first time shot at goal which had the keeper diving and both teams standing in awe of the shot. Now pressing higher, it was time for Martin to show his strength as the Gobaith defence bounced of the striding midfielder who shrugged off the challenges to find the net.

A long wait now before the Dragons were back in action and a bit over heated from a warm up in temperatures now reaching around 28 Celsius took it’s toll as we made our way on to the field for the third match. That is taking nothing away from Green Machine, the team from Luton were well skilled as a unit and showed they would be a threat going on through out the day. The goal would come out of a great driving shot that Brad Tooth was just unable to get to in time. Stuart Howles in a more attacking role was making every effort to try and get the team to equalize but was closed down by a very strong defence. Harri Jackson was showing skill and wisdom beyond his years in this match, being challenged on the ball every time, he was quick to get past players and quick to get back in to position when the Green Machine were to powerful.

Even with that result we were now Champions League Qualifiers.

The colourful opposition from Yorkshire were up next, a familiar opposition after the two teams met in February in another 7 a side tournament. 1- 0 winners the last time out, the guys in white were ready to see what the match would bring this time. Adam after taking a knock to his ankle in the game against Green Machine was looking to make his time on the field count and was soon rewarded as he struck a non stopper in to the top right out of the keepers reach. Not liking the one on the score sheet, he was soon challenging the keeper again and with another weighty shot that this time saw the keeper scramble to his bottom left. Ste O’Neill was next to hit the back of the net with an absolute screamer of a shot that was one of those blink and you have missed the goal moments. After half time a change of personnel saw Gaz Roberts nearly net his first goal for the Dragons but a defender blocked the effort. Josh Turner was back on shortly afterwards swapping for Gaz and was again nearly rewarded for his efforts as his shot just narrowly missed the goal. The multi coloured kit of Battling Fat Lads were not ones for lying down though as they managed to find the net just before the final whistle was blown. We would love to see these guys up on the North Wales Coast in an 11 a side match one day.

The Rhondda & District Premier League football club were flying high going in to the match against the Dragons having just competed in a high scoring win. Both teams needed a win to be in with a chance of winning the league, this match was more like a game of chess, both teams tactically sound hoping for a break down in formations. An excellent showing for the defensive skilss of Rich Parry, Stuart Howles, Steve O’Neill and Craig Berry were on display in this match. It wasn’t until around 2 minutes from the end that the referee broke the news to the teams that it would go to penalties if it was a draw which drew both teams into a last minute battle but it was not to be for both teams. So a best of three penalty shoot out it was and Adam Dexter and Martin Anderson netted their goals as Craig Berry after being asked to retake his penalty which hit the post. Congratulations to Tonyrefail Welfare FC on becoming the first Charity Champions League Winners. The North Wales Dragons finished third out of twelve teams and our very own Craig Berry was selected as player of the day.

Huge thanks to Gobaith Cymru FC for an excellent day out and to all of the teams we played on the day, we look forward to playing you all again soon. The day was a great success raising over £1000 for the British Liver Trust.