The Dragons took to the field once again under the cold shadow of Prenton Park on the Shaftsbury pitches on Sunday 27th April. With training going so well at the moment the Dragons were up for the competition. Total Tranmere are no strangers to the Dragons, having met on several occasions now, the results have been getting closer and closer. 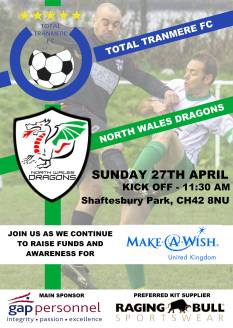 The Dragons kicked off in our Raging Bull made, GAP Personnel sponsored kit up hill with the wind behind us, we pressured the goalkeeper early with long-range efforts from Paul Cornwall, Martin Anderson and on loan from fellow charity football team the Ayrshire Outsiders we had Ryan Gilbert who had the keeper worried on several occasions. The men in blue and white stripes were quick to rush forward with the ball but were constantly being stopped by the strong back four, but it was the counter attack that was to be the Dragons undoing for the first goal. The Dragons were quick to try to bounce back not allowing Total Tranmere to leave their half of the pitch and soon had them on the ropes with multiple corners coming close to equalising the score. There was a stop in play shortly before the end of the first half for an injury to Liam McMullen for Total Tranmere who was helped off the field by his manager Mike Jackson and Dragons forward Mark “Berger” Williams. The first half whistle blew as another long-range effort was close to finding the back of the net.

The Second half started as we had finished the first with the Dragons posing the biggest threat on goal and making sure all counter attacks were quickly dealt with. Unfortunately it would be the Dragons kindness that would be to blame for the second goal as another Total Tranmere player hit the ground off the ball causing several of our players to stop to see if he was fine. Total Tranmere however were quick to react, hearing no whistle they carried on up the field and were to net their second with a 2 on 1 chance on our keeper. Disappointed but determined the Dragons carried on with heads held high, soon attacking again with close chances again which even saw Rich Parry the Dragons left back dribble his way past several players to have his shot blocked near the keepers post. Total Tranmere were to net their third and final goal as a corner from the Dragons was cleared leaving a very quick attack by the Tranmere Rovers FC supporters, bodies managed to get in the way but a slight deflection saw Dragons keeper Tom Thornton wrong footed and slipping in the sand on the keepers line. Even three goals down we did not look like the beaten squad, pressurizing the keeper on multiple occasions as we switched to a more attacking 4-3-3 formation and it soon payed off from a cross as Mark “Berger” Williams rose above all players to head the ball home. The Dragons were now thirsty for more and had all of the Total Tranmere squad in their own half. There was not enough time for the team as the final whistle blew making the final score Total Tranmere 3 North Wales Dragons 1.

Thanks once again to Mike Jackson and the rest of the Total Tranmere squad for playing us and we look forward to seeing you later in the year.