Dragons take on the veterans

On March 17th 2013 the Dragons took part in a friendly match against the veteran players of Llandudno Junction FC to help raise funds to send the juniors over to Ireland for a tournament.  The match was originally scheduled to be played at the Junctions home on the Flyover Pitch, but heavy rain through Saturday and onto Sunday morning made the pitch unplayable. Rather than rescheduling the match it was moved to a new venue, the Dragons home for this year Parc Eirias. Although inside the indoor 3g pitch you would think that we were at an away match thanks to the great support the Llandudno Junction FC Juniors and parents were giving the veterans. 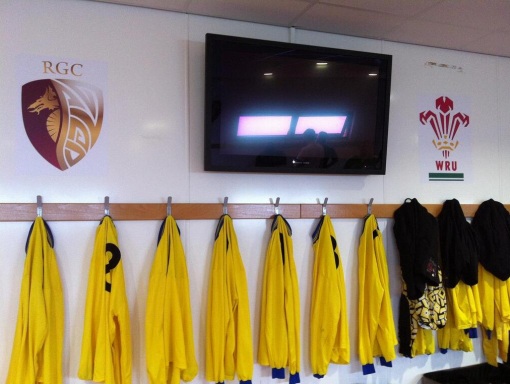 Fielding a strong team of 13 against the Junctions 17 the Dragons caught Llandudno napping from the off and soon fired in the opening goal sweetly struck by new player Paul Cornwall. The Junction soon found an equaliser as the Dragons struggled to keep the defensive line in order. Captain for the match Mark Williams was quick to put us back in the lead with an impressive header which caught the keeper off guard. The Dragons pressed on and were putting on a strong amount of pressure with impressive strikes being pushed on to the bar and just going wide, but fell to the counter attack as the Junction soon found an opening to make it 2 -2. The we go, you go style of match continued with Mark Williams completing a hat trick while the Junction kept on equalising untill the half time whistle was called just after the veterans had netted their fifth to make the scores 5 – 4 to Llandudno Junction veterans.

The second half kicked off with the team looking to equalise sooner rather than later. This didn’t prove to difficult as Paul netted his second goal of the match with a power shot into the top corner. Injuries soon began to appear in the Dragons team with midfielder Rick Ward having to come off for Danny Robinson making his second appearance for the team, with the Dragons rearranging the Junction were finding gaps through the midfield and soon found themselves in front after a scramble for the ball saw an own goal and then a super strike that was impossible for the Dragons keeper to stop made the score 7-5. Battling hard the Dragons managed to level the scores up with Mark getting his fourth goal and Paul netting his hat trick making this new pairing a great strike force for future to teams to watch out for. The Junction soon took hold of the match with fresh players coming on and finding the net on three separate occasions. The final whistle blew with the score being 10 – 7 to the veterans.

A tough loss to take for the Dragons but we can take the positives out of the match, a new strike force was made, more match time for the players and above all the day managed to raise up to £250.00 towards the trip for Llandudno Junction FC Juniors.

A great partnership has started with the Junction Veterans and we look forward to playing them again in the future .